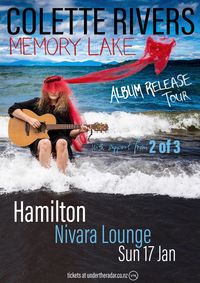 Opening for Rivers are the dizzyingly talented bluegrass/folk duo, '2 of 3,' with a sound similar to ‘The Milk Carton kids’, and ‘Gillian Welch’. Brothers Laurence (guitar and vocals) and Sam (guitar, vocals, mandolin, and bass) know how to put on a good show.