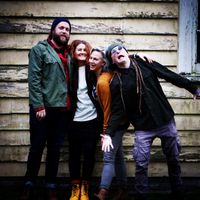 Colette Rivers & Her Band at Moon

Come on down to Moon Bar in Newtown, Wellington for an awesome night of Indie-music pleasure! Colette Rivers and her band (4 piece) will be playing songs from her recently released debut album, 'Memory Lake'. There is a lot of awesome talent and cool music to be had- and for only $10!!! The line-up is as follows: 7pm Ingrid Saker - Ingrid is a Pōneke-based musician with a mix of folk and blues influences. While her band, Ingrid and the Ministers, is all-out rock-n-roll, her solo performances are a softer, more intimate and lyrical journey through the landscapes of love, loss and redemption. 8pm Colette Rivers - American-born, New Zealand raised, Colette Rivers is an indie-folk song-writer and producer who has just completed her debut album, 'Memory Lake' launch and tour. She is joined onstage with Jordan Tredray on drums and newcomers, Kerrie McEwen on electric guitar and Hayden Maskell on bass. 9pm Scott Pilgrim verses Uzume - Scott can these days be found dancing on the electric side with Wellington band Soda but in his quest to ever do something a little new and different Scott has called for a title fight with the god of joy and happiness, Uzume. Live and exclusive to songs 6021. Door from 6:00pm. Ingrid Saker- from 7:00pm; Colette Rivers - from 8:00pm; and Scott Pilgrim - from 9:00pm Tickets $10 at the door or from Eventfinda. https://www.eventfinda.co.nz/.../songwriters.../wellington There is a limit of 100 tickets for this show.