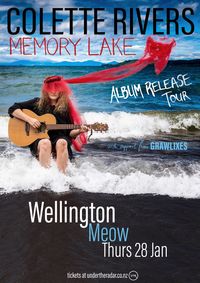 Opening for Colette is Wellington-by-way-of-Dunedin indie-folk band, 'Grawlixes', whose music often deals in the melancholy with self-deprecating honesty and beautiful boy-girl harmonies, sung by co-founders Robin Cederman and Penelope Esplin.